“For the back of the house: no, all Trump voters are not white supremacists. YES, all Trump voters were comfortable electing a white supremacist to the highest office in the nation. This tweet is weak because the President doesn’t want to upset the members of his base because the members of his base are either okay with this or they are the very tiki-torch-lit assholes pictured above. These are guys wearing MAGA hats. These ARE the faces of your base. This IS the same rhetoric that Trump has always espoused. It’s Racism Classic™, now with Extra Tiki.”

Source: My fellow white Americans. | I Am Begging My Mother Not To Read This Blog

Imagine if these people ever faced actual oppression. pic.twitter.com/dhPCbtfEjO

There is hatred and devotion to satanic ideologies that have slaughtered millions and millions…and there is resisting this.

Any attempt to ameliorate this, to talk it away, to justify it…any attempt to “Fox News” it is in itself evil and enabling.

From the Anne Frank Center for Mutual Respect:

MR. PRESIDENT, LEARN THESE WORDS FROM ELIE WIESEL OF BLESSED MEMORY: “We must always take sides. Neutrality helps the oppressor, never the victim. Silence encourages the tormentor, never the tormented.”

ttaf supporters…the ones in the background are your family now.

Not me…not anymore…not until you denounce them, and their new avatar of bigotry ttaf.

If you think there is, then I have no truck with you.  Ever.

God save us…we are truly entering into hell.

if you write this off as “fake news” you sign the line that satan offers you…your own piece of mind and security and prosperity in exchange for your soul.

Charlottesville, VA – A group of hundreds of neo-Nazis, KKK members, and other white supremacists in town for Saturday’s ‘Unite The Right’ rally assembled at ‘Nameless Field’ on University of Virginia (UVA) campus Friday night.  The group was marshaled by a security team who instructed them to march in a column bearing lit tiki torches. […]

you now know that you would have supported Hitler

This is what you think of as “again”?  ttaf supporter??  I am asking you…is this your “again”?

You bought this monster’s rhetoric and snake oil because he said “Make America Great Again”…and immediately this erupts when your avatar of hatred takes office.

There are literally thousands of incidents similar to this that have happened since ttaf was elected.  They are easily documented, and if I were to just press them here it would be boring in its droning continual outpouring.

The marchers were shouting “Heil Trump”…

This is your again.  This is what you wanted a return to.  Except that the genie is out of the bottle…people are NEVER going back onto Massa’s plantation…ever.

Their courage and passion carries them forward…

And how fascinating that you do not say that the absolute fuckers who are channeling Nazi hatred and rage and want to resurrect the 3rd Reich should not have been out there!!”

Why won’t you rise up and join all decent people and denounce racists and bigots?

Because you know you are wrong…and you will not admit it…and it breaks my heart that you do this in the name of God and the name of America.

I wanna vomit that you have become this…no…that you have not actually been what you pretended to be for so long, and when the opportunity came thru ttaf to dive into the pool of shit you did a triple backflip of joy. 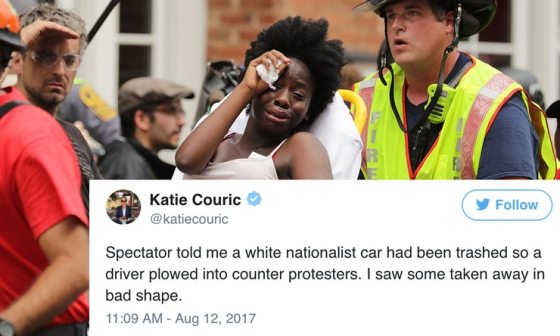 Violence and chaos broke out on the streets of Charlottesville, Virginia on Saturday during a white supremacist “Unite the Right” rally. Tensions were already bound to be high after a Friday night demonstration at the University of Virginia, wherein …

Source: Tweets About Charlottesville Capture The Chaos Of The Protest & How Terrified People Are

My friend John says it again…straight out.  And I will say it too:

If you are not horrified by this you are a racist.
If you will not see how ttaf’s silence on these matters sets the stage for them, then you are a blind racist.

“Sometimes we just need to say it without adornment or finessing.

“What we’re watching unfolding in Charlottesville, with hundreds of white people bearing torches and chanting about the value of white lives and shouting slurs, is not a “far Right” protest. When you move that far right, past humanity, past decency, past goodness—you’re something else. You’re not a supremacist, you’re not a nationalist, and you’re not alt-Right. This is racism.

Source: Yes, This is Racism

To every last supporter of ttaf (that is “trump the absolute fucker”):
I hold you personally responsible.

This is what you ushered in with your vote for an obvious bigot, a documented racist, and an unrepentant greedy narcissist.

NOTHING like this was going on before him…but he gives sanction and empowerment to such actions with his violent and reckless rhetoric.

while at the same time you deny such a lenient standard for “regular common folk” who don’t have the ability to grant power and position.

Here is a clue:  if you would deny a candidate to be your youth pastor based on the documented history of ttaf…then you are flat out approving evil in your approval of ttaf.

You say “Oh, he has repented, he has changed.”  Really?  In what world is it considered of God to say and do things such as this article lays out?  Which ttaf could EASILY come out and denounce and move against with the Justice Dept. and yet he is as silent on these topics as he is his fawning allegiance to pooty-poot.

What makes me wanna vomit is that I suspect most of you are just fine with the Alt-Right White Nationalists “putting the uppity negroes” back in their place.

The mask has been ripped off:  I see you now, monsters.  At best you are indifferent to the plight of the oppressed and filling your coffers off their blood, and at worst, you are a racist monster.