“We were dead before the ship even sank” she said.
Thin tendrils of pain wreathed round her face
unnoticed and they left scratches unseen.
The Dutchman walked the decks in her eyes, and
in her voice was the echo of wailing and tentative tongues
trying to tell themselves they were sailing
on the ship of the dead. 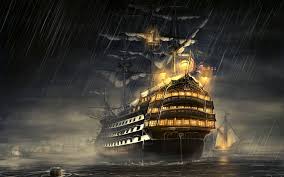 Her hair crowned her soaked skull, a holly wreath
presenting her own crown of thorns and those claws
dug in to her waxy and pale fishflesh and clung
like limpets and mirrored the
cold and enflamed tendrils of grief.

“Gone, given up by the ghost we gave up the ghost”
she murmured.

“We fell into the vast
and bottomless sea,
and the ship Sailed
unheeding on into
the long and everdark night.”

I thought on these things
as my feet were burning hot
in the bright and gritty sand,
and my face baked in the grip
of the gleaming sun
and the taste of salty strain
and the happy ache of
love’s labors in my bowed back…
and I was fiercely glad
that I had never taken that voyage.

One thought on “Ghosts”