It is with much sorrow and grief that I write…because I know you will take refuge in your martyr pronouncements of “So Be It” and other defense mechanisms that you have used to cover up the essential truth you have been fleeing from:  that you have lost your stride in the bogs of self-pity, and that you now believe things that would have appalled you years ago.

I want you to feel the separation that is being forced on these children.

I want you to grapple with the reality that you helped put these children here, with your vote and callous hard-hearted blindness to the reality that your beloved conservatism has been HIJACKED…and all of you on the plane do nothing because they let you sit in 1st Class and have free drinks.

You once bewailed that you were “not being allowed to just be an old foolish person who was indulged in peace and not confronted with opposition”…yeah.  You who have not been hauled off to some internment camp, you want that…

because they aren’t as important as you are…I guess you see yourself as more “the least” than they are and so you shove them out of the way and shunt them aside so you can gobble up your last morsels of comfort.

You watch programs and listen to programs that croon and lull…while simply ignoring the actual truth of the Gospel Message.  I am heartsick and repulsed with the wallow you have made in the plains of Idolatry and Complacency.

There is still a chance for you.  Repent…repudiate your vote for ttaf….begin to speak the truth you know in your bones. 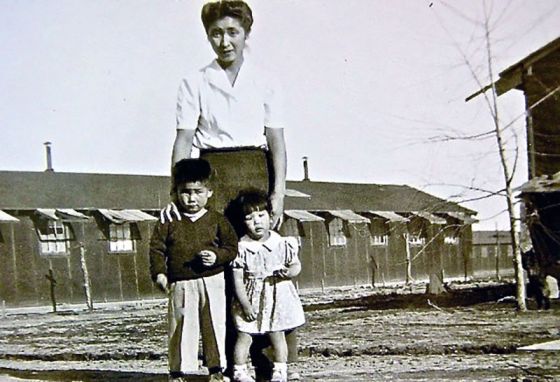 What are some of the long term effects that these children in detention may have to live with?

I am a psychotherapist, so I work with children who have been traumatized and what they are experiencing is definitely trauma. One of the worst traumas for children is to be separated from their caregivers and then placed in what they calling “temporary detention facilities.” But it’s indefinite detention—they have no idea how long they’re going to be held. They have no idea if they’ll ever see their parents again.

The long term impact that I’ve seen in my own Japanese American community is this hyper-vigilance, this need to constantly prove themselves, and always being on edge. Japanese Americans are viewed often as the model minority but I see the behavior of needing to strive and not offend and belong and maybe give up their own personal aspirations to fit in has come at a great sacrifice and is a reaction to having been incarcerated unjustly.

You left the prison camp when you were two and half years old. How did those years affect you?

This kind of treatment has consequences for a lifetime for a child. The trauma effect is pretty severe when there’s been captivity trauma. We were unjustly incarcerated when we weren’t guilty of anything.

Today I live with anxiety about the possibility of random accusations or being blamed for something. That’s constantly present. So we are always working hard to please people and not cause trouble. There’s a constant need to be perfect. We don’t show up in the criminal justice system but we end up with a lot of psychosomatic disorders and symptoms resulting from over-achievement. We question our integrity and worthiness. I’m over-educated, for example. I have a Bachelors, Masters, PhD, I’m a licensed therapist, a certified gerontologist, the list goes on.

That high level of anxiety has given me high blood pressure. A lot of us who were incarcerated as children have high blood pressure. A study by Dr. Gwendolyn Jensen found that Japanese men who were detained had a 2.1 greater risk of cardiovascular disease, cardiovascular mortality, and premature death than Japanese men in Hawaii who were not imprisoned. [The study found the youngest detainees reported more post-traumatic stress symptoms and unexpected and disturbing flashback experiences.]

The Department of Health and Human Services released pictures on Wednesday taken at a shelter detaining 1,500 boys. Near the cafeteria, there’s a mural with Trump’s face on it. The mural reads: “Sometimes losing a battle you find a new way to win the war.” This is a quote from his book The Art of the Deal. What goes through your mind when you hear that?

That is overt, paternalistic brainwashing. It implies that what’s happening to them is some beneficial oversight. And the message is really saying you need to accept this situation that you’re in and that there will be a benefit to you. That is a common message of an oppressor or a captor to get control over the victim. It’s appalling.

One of the ways you know you’re a victim of mass incarceration is that the perpetrator uses euphemistic language to distort the reality of what’s being done to them.

This is what they told us when we were at the prison camps: This is for your own good. We’re protecting you from harm that others may direct toward you and this is a way for you to show your loyalty. And I think even after the World War II incarceration of Japanese Americans, many people still believe that.